Our Linen Stories initiative has been aided on every level by reference to Maps and Charts, guiding our tour routes around Scotland and research trips to mainland Europe and have also been used as display items in various forms at every stop, giving object focus to so many of Our Linen Stories. In Grantown-on-Spey for example, Museum Manager Dan Cottam offered an original plan of this ‘Highland Linen Newtown’ providing evidence of the importance of planned towns with linen manufacture at their centre, established in attempts to calm rebellious Highlanders with new jobs and the promise of prosperity.

Throughout the country, our land, rivers, conurbations and coast have all been marked by a relationship with flax and linen. In a very real sense, our choice of venues and localities reflects a desire to Map Linen in Scotland. In all our destination towns we have collaborated locally on a Linen Walk and begun to create a virtual Linen Tour of the related county: our ‘Linen and the Lang Toun‘ and ‘Flax Fields of Fife‘ projects are examples drawn from out time in and around Kirkcaldy.

Indeed, our new Journeys in Design Hub in Kirkcaldy is our base to take this ‘mapping linen’ project forward including the development of organised tours around the Flax Fields of Fife from Summer 2020. Currently we are creating routes to enjoy by car and the eventual goal is to create a ‘sustainable day trip’ utilising public transport. In the meantime, extending out from Leith, we have begun to plot many points of linen interest in the Lothians. We would value help with suggestions of more, perhaps from residents and traders with linen links to share?

Our Linen Stories locations in the Lothians as elsewhere include former weavers’ cottages in rural villages, bleach fields and old Linen Mills near riverbanks, factory chimneys and drapery outlets in towns and former rope and sail making warehouses near seaboard ports. For our virtual tour we include contemporary points of interest to visit en route too: local museums, culture hubs, creative studios and retail outlets. Museums, makerspaces and retail outlets provide important nests to nurture design talent, contributing significantly to the ‘ecology of design’ in Scotland.

Throughout our travels, we have been regularly inspired by the volunteer staff that contribute so much to our country’s local museum and exhibition centres, offering real commitment to their locality and heritage, enhancing the lives of others through their contributions. This new opportunity to collaborate on an Edinburgh Walk and Lothian Tour is also an opportunity for me to thank some of the many people who have contributed locally.

Many thanks go to Vanessa Habib, textile historian researcher and Fellow of the Society of Antiquaries of Scotland and to Chris Fleet, mapping expert and senior curator at National Library Scotland. Thanks to Dieny Itoe and her team at Custom Lane in Leith and the staff at the brilliant John Gray Centre in Haddington.

Paper maps and charts of all sorts were backed with LINEN for ease of use and for longevity.

Early Estate Maps were commonly created to help define land ownership and tenancies, produced by skilled ‘itinerant’ mappers to commission and were backed with linen left elongated on one or more edge. Punctuations in the material along one edge indicates fixing to a baton for office hanging. Lengths of linen extending below the map paper indicates it was likely to be rolled for transporting.

Many still remember the over-sized World Maps hung in primary school classrooms of old. We were able to examine those close up during our exhibition at the Highland Folk Museum. Their wonderful salvaged Classroom building displays an interwar example with the symbols of Empire emblazening the margins but cracks in the paper has not meant deterioration of the whole thanks to the resilient LINEN backing.

Backing as was used to prolong the life of paper maps, offered for exhibition by Scottish Conservation Studio 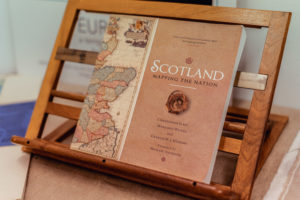