To enhance the trade in Scotland, a lending exchange for linen merchants was established in Edinburgh in the 1740s, The Edinburgh Linen Company. Wary of frightening investors from England with too parochial a name, the Scottish investors christened their new enterprise: The British Linen Company. It was the largest trade body in the nation and handled every major stage in the manufacture of linen, marketing hundreds of thousands of yards of cloth annually.

By the 1760s, the enterprise had begun lending to other traders too and effectively made the transition from manufacturing to banking, gradually withdrawing from its association with linen altogether.

The British Linen Company was the third bank to be established in Scotland after the two great rivals: The Bank of Scotland and The Royal Bank of Scotland. Emerging as it did from the linen trade throughout the country, it was the arguably the first bank in the world to have a branch network. In fact, it was not called a bank until 1906 and it continued to exist until 1971, well remembered by many in Scotland today.

Linen as a material has great tensile strength and most paper banknotes have traditionally been made from a special blend of textile pulp including linen. In the USA, the dollar bill is composed of 75% cotton and 25% linen.

Paper currency first developed in China during the 7th century and European explorers like Marco Polo introduced the concept in Europe during the 13th century. The first bank to initiate the permanent issue of banknotes was the Bank of England issuing linen paper notes in 1695. It was the Scottish economist John Law who helped establish banknotes as a formal currency in France.

Many countries are now of course replacing paper notes with polymer, but not all. In the Ukraine, the cost of domestically produced linen fibers is markedly lower than that of imported cotton and plastics; their production of pure linen banknotes supports domestic agricultural producers and has led to increasing export sales. 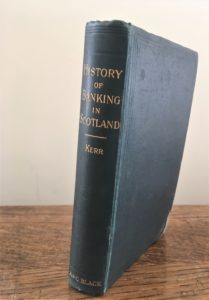