Before Scotland led the Enlightenment of Europe and the Union led industrialisation of the world, Scotland was a developing nation relying heavily on subsistence farming, exporting raw materials but importing almost all of its ‘manufactured’ goods from abroad.

The development of the linen industry in Scotland owed much to the commitment of early investors who desired for their nation a place at the international trading tables. Scotland could make it! Scotland could certainly rival Ireland and England if the laws of the land and the flow of capital would allow. Further afield, Scotland could take advantage of well-established sea trade links with Holland.

This investment enterprise found a vehicle in the Board of Trustees for Fisheries and Manufacturers, a body funded by the newly formed government of the Union of Scotland with England. The Board of Trustees brought Huguenot expertise to Edinburgh, sponsored schools of weaving and established Awards for Excellence joining designers with manufacturers, all to improve the linen industry.

As linen trade and manufacturing developed so did our ports, cities, and industrial landscapes. As power and transport links developed, so came a shift from Scotland’s eastern ports trading with continental Europe, Russia and the Baltic to our Atlantic-facing ports in the west, trading with the Caribbean and the American colonies.

With the rise and demise of our industrial might, so did buildings rise and fall: we trace some of the features of this landscape as we tour and examine what has become of bleach fields and factory floors. In each of our tour stops we look at the repurposing of surviving linen buildings in the region: flats, museums and creative hubs are all testament to post-industrial linen stories. 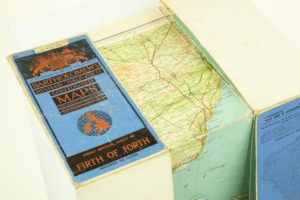