Today and through history, times of strife and division within countries have resulted in the need for the desperate to flee their homeland for safety and sanctuary somewhere else.

As it is in some tragic circumstances today, so it was in seventeenth century France. Louis XIV determined that France would be purely Catholic and previous acceptance of minorities was not to be tolerated. Within France, a Protestant group known as the Huguenots soon became the subject of random local violence then organised national persecution.

The Huguenots fled, seeking friendly nations first to shelter them and then to offer them new lives and some degree of economic security. The majority took their chance overland and made tortuous journeys to Calvinist leaning centres in the Netherlands and Germany. At this time in history road transport was much more dangerous and so many used sea routes to escape, smuggled out in boats as cargo to shores and shelter in England and further to the plantations in North America and Southern Africa.

The Huguenots were an industrious group and France suffered from the loss of their skills. They were of all classes including wealthy entrepreneurs and others highly skilled in crafts and trade. Like many immigrant populations, they worked hard to earn a living in their new surroundings, not always welcomed by their new neighbours but able to establish key centres of making where ever they settled.

Their contribution to the development of textile craft, industry and trade was highly significant at a time when ideas of economy, nationhood and international trade were enlightening society. In Scotland and in Ireland and Holland The Huguenots brought vital impetus to these movements and Our Linen Stories tour highlights these contributions.

In Lisburn we told of how a linen trading was transformed with Huguenot influence to result in a vital national industry and in Leith we told of the Picardy Placements in an attempt by The Board of Trustees for Fisheries, Manufactures and Improvements in Scotland to improve the nation’s linen trade.

In current times, many have sought to establish what effect immigrant populations have on their new home nations. Complex confounding factors make research in this area difficult, yet not impossible: find a time in history when an immigrant population joined a home country in isolation of other influences and see what resulted over subsequent generations. Economists in Germany published just such a study in 2014: they used the Huguenot diaspora in Rhineland and showed that Germany grew in economic might as a direct result of immigration. 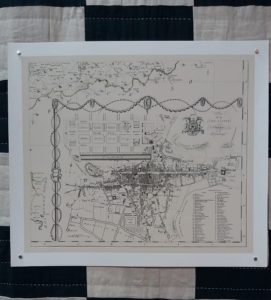 Picardy Village, Plan of the City, Castle and Suburbs of Edinburgh for Edinburgh City’ by Thomas Kitchen 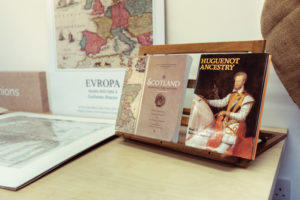