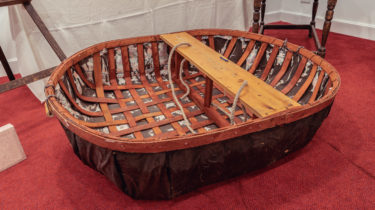 The Currach is an ancient boat form common to Scotland, Ireland, Wales and other cultures worldwide.

The Spey Currach was used by loggers along Scotland’s fastest flowing river.

We’re teaming up with colleagues and communities across Badenoch and Strathspey includingto co-design and produce a brand new Currach for Scotland using Flax Fibre bio composite.

A Call to Currach

Journeys in Design is keen to draw on the locality interest established in the last 12 months in The Currach Project, focussing on one of the world’s oldest boat forms and known to have been utilised on Scotland’s fastest flowing river, The Spey.

Journeys in Design has been exploring the rich material culture of flax fibre and linen in Scotland, including the development of material science around flax fibre. As glass fibre is to fibreglass, so flax fibre is to flax fibre bio-composite, conferring strength and some flexibility. We have evidenced this by display of Scottish-designed and manufactured flax skis as part of Our Linen Stories exhibition.

The Currach is traditionally made from an animal hide stretched over a wooden lattice. The boat form varies in use on different waterways and is often named after the associated river. The Spey Currach is a round basket form and was used by loggers transporting rafts of cargo towards the busy eighteenth- and nineteenth-century North Sea ports: this work is beautifully enlivened by displays in the Grantown Museum.

Current interest in this boat form in Ireland and Wales is buoyant with local Curragh Clubs on the Boyne for example and an active Coracle Society in Wales.

Journeys in Design ventured to The Highland Folk Museum in Newtonmore with Our Linen Stories in October 2018 and was introduced to the boats created locally by Raymond, a Welshman living in nearby Insh with a passion for coracles. Raymond has volunteered for some years at the museum, creating the round baskets and supporting their use as pleasure boats on the museum pond during the summer months.

Wider interest in the boat form in Scotland has been confined to individual enthusiasts and occasional articles in the press, radio and television.

Journeys in Design returned to the Highlands in May 2019, to Grantown-on-Spey, one of the planned eighteenth-century Highland Linen Newtowns. In the town museum, we displayed one of the fibreglass Currachs on loan from the Highland Folk Museum.

On 18 May 2018, International Museums Day, we set out our proposal:

Informal discussion at this time has now led to a strong belief in the merit of pursuing this project more fully. We seek to explore the generative potential of this proposal for Grantown Museum and its community and more widely in the Badenoch and Strathspey region of the Highlands, noting as worthwhile potential outcomes:

Learn more about the context of the Currach Project in this video. Here, author, journalist and committed cultural historian Bruce Clark is in conversation with Our Linen Stories curator John Ennis. Among other things they discuss early Christianity, long standing trade routes and popular pleasure sailing today, as well as the Currach Project itself.